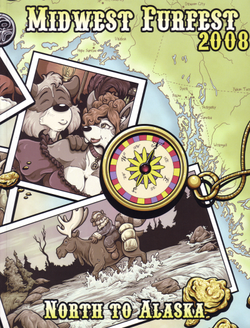 The cover of the Midwest FurFest's 2008 Convention Book. 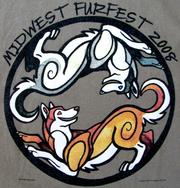 Midwest FurFest 2008 was a convention held at the Westin Chicago North Shore in Wheeling, Illinois from November 21st to November 23rd, 2008. Total attendance was 1,992, which included 358 participants in the fursuit parade.

The Guests of honor were:

The convention charity was Rainbow Animal Assisted Therapy, for whom the convention raised a total of more than $15,000. 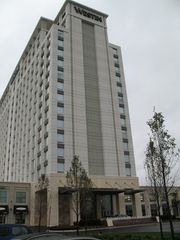 The date and the location of the convention were reserved for the closing ceremonies of Midwest FurFest 2007.[1], where it was announced by a video created by Cheetah that the convention would be moving to a new venue, as function space at the Hyatt Regency Woodfield was limited, attendance had grown rapidly,[2] and the main hotel and its overflow were getting tight on rooms.[3]

The new location is approximately 15 miles from the old venue. It has significantly more function space, although fewer rooms.[4] The dates and room rates are locked in for three years, although both the convention or hotel have the option to cancel the contract each year.[5]

The new convention chairman this time was Duncan da Husky.[6]

On the first night of the convention, Nov 21st 2008, everyone from both the hotel and Convention Center were forced to evacuate after the fire alarms were set off, indicating a possible fire. After an investigation, it was found someone decided to smoke in their hotel room which was designated as a non-smoking area, unintentionally causing the smoke detectors to set off, which in turn set off the fire alarms in both venues. Everyone was eventually allowed back in after standing outside in the frigid 28 degree weather for up to half an hour.

The hot tub was closed for a significant period, reportedly because some attendees decided to have sex in it.[7] Hotel and convention staff were not amused.