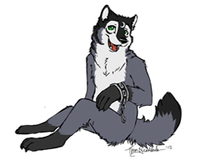 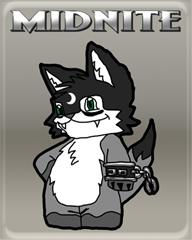 Midnite has always had a love of animals and art, and combined the two by pursuing an education in art, literature and philosophy. He's always had a boyhood love of comic books and classic cartoons, such as Looney Toons, Disney's Robin Hood, and almost anything Studio Ghibli.

Midnite is a therian-based Pagan with Buddhist undertones. He bases his way of life and principles on Bushido, holding loyalty, justice, and honor in high esteem. Midnite also takes knowledge very seriously. He has read such books as The Peaceful Warrior, Sun Tzu's The Art of War, Miyamoto Musashi's The Book of Five Rings, The 33 Strategies of War, and The Power of Myth.

Midnite is a lover of nature and seeks to escape to its embrace whenever he can. He loves camping and is passionate about wilderness survival, feeling that one can live off the land if necessary. Midnite is also a lover of life and laughter. A greymuzzle, he used his years of experience to lend a helpful ear to those who need it, giving advice where he can. Midnite is also a big supporter of LGBT Rights.

Midnite is happily married to his mate/wife, Mystic Stargazer, and they live in their Ogden home with their two dogs and two cats. Midnite is also a huge Pittsburgh Steelers fan.

Midnite was first introduced to the furry fandom in the month of August, 2011, by his brother-in-law, Tusoul Noru. He is a member of both the Utah Furry Forum and the Utah Furries. He regularly attends meets for both groups and is one of the Administrators for the Utah Furries.

Midnite is also an Administrator of FurMedia, a conglomerate of social media services and markets for furries, to help them learn or improve their social and artistic skills.

Midnite's fursona is a American Gray wolf with dark gray fur, a white underbelly, and a black-covered head. Midnite has been seen in feral, anthro, and Chibi/cub forms.[1] He is larger then most wolves in all his forms and knows how to throw his weight around.

Midnite's markings consists of a white crescent moon on his forehead, symbolizing his connection with his Goddess, the moon. He has green eyes with black swoops under them and has been seen wearing a black and gray shackle on his left paw. The story goes that someone tried to capture him to be a pet or used as entertainment. He escaped and killed his would-be captors, but wears the shackle as a reminder of his freedom and what it can cost.