This article is about the term. For the Extinctioners character, see Jacob WhiteEye. 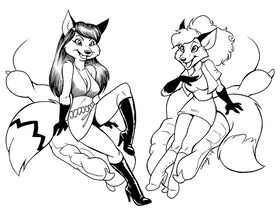 As a furspeech term, it is normally used in the context of Microfur (or just Micros), meaning a furry character who is smaller than the normal size. It may also refer to characters who are normally sized, but simply small (mouse vs bovine character). It is the opposite to Macro, which means large.