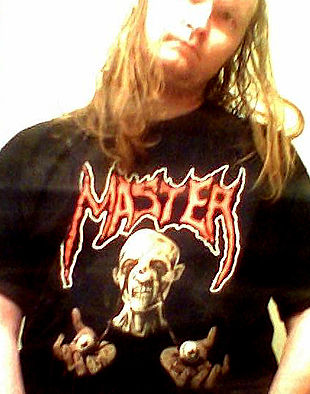 Mickmo is an artist/writer/creator from the Kansas City, Missouri area. His fursona - and spirit animal is a Tiger Cat, or Oncilla.

Mickmo was born on 17 June 1973, and his first drawing was at 3 years old. Which was a drawing of a crude window on a cinder block building in crayon. At 6, his mother gave him his very first comic book: The Incredible Hulk Issue 230. He was raised on numerous 80s cartoons such as Mighty Orbots, ThunderCats, Ulysses 31, Spiral Zone, Inhumanoids and Thundarr The Barbarian.

Mickmo graduated from Longview Community College in 1996 with an Associates in Commercial Art and Industrial Design, with a minor in Publishing. The school taught technical art and structure. He also took a semester summer course at the Kansas City Art Institute, and a year and a half of courses from Penn Valley Community College.

Mickmo has done various comic shows in and around Kansas City, as well as cover art and illustrations for metal bands like Grenouer, Punished Earth and Terminal Descent.

In the early- to mid-90s, while still in college, Mickmo was doing art editor duties for Passline Comics, but broke away after a bad stint with a publisher. He started self-publishing various science fiction and horror one-shot comics - mainly books like Tales Of Retribution and Dark-Mind. He also did small illustrations for Sam Kieth's The Maxx in 1993. As well as an early version of Bug-Slayer, an underground comic book series that would later be revised in 2002.

But Mickmo also did work for Blek; an Icelandic comic book publication that would later introduce him to Kjartan Arnorsson of Big Funnies.

In 2002, Mickmo was introduced to an organization loosely based out of Kansas City, called the Comics Creators Network and was with them for 2 1/2 years. He also did one published work with the The Pitch of Kansas City. It was from this that he was submitting to publications until he was let go from the C.C.N, and dedicated more work to other publishers outside of Kansas City.

Mickmo also did music for a small-time side-project of his. Called Nemesis Star: Solace Of Shadows. It was based on space and time, and his first foray into ambient/noise music. 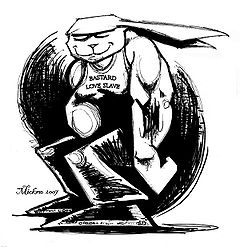 A Mickmo Convention Sketch From 2007

Mickmo had been a part of over 40 comics. On the Radio Comix side, he was known for doing various short stories and illustrations for Furrlough, Genus, Milk, Hit The Beach and Milk Presents: XXX-MAS. He has also been in various Antarctic Press specials, including: Gold Digger Swimsuits, Gold Digger Annuals, the Ninja High School Yearbook and Pirates Vs Ninjas Annual Issue 1.

One of Mickmo's longest-run stories was "Death Metal Bunny Brigade" for Furrlough - a series about Mickmo's travels of himself and the death and black metal bands he used to hang out with and act as street team for.

Mickmo sometimes draws for Serial Killer Magazine, a publication dedicated to true crime. He is a distant relative of Bob Berdella, the infamous serial killer of Kansas City, and has illustrated him and other infamous serial killers and mass murderers such as Jeffery Dahmer and Aileen Wuornos.

Mickmo has been a long-term survivor of a condition called post-traumatic stress disorder for over 20 years. As well as an advocate of PTSD. Since the tragic passing of his mother at 14, Mickmo has made it both a passion and dedication to doing comics his own way.

“I think it was my Mom's dying wish for me to be in comics. At first, I had no idea what I had? I thought I was just going crazy. But after years of therapy, it all became clear to me what PTSD really was. I think, without my flashbacks on a semi-daily basis. My imagination would not be as clear and as cluttered as it is sometimes! I believe art is one of the true callings I have, cause I really suck at math and science. Art got me through the long and hard times, death at my feet and being utterly reclusive. But I guess, my comics stories and art will survive long after I do. Psychosis makes for some great art forms! What would I do without it?”

Mickmo has also survived a remedial foot cancer as well in 2009. From which he recovered successfully.