A mouse (plural: mice) is a small rodent of the genus Mus, belonging to the family Muridae. They live in many situations on most of the planet's continents. 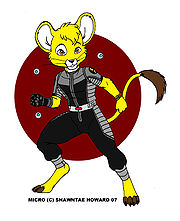