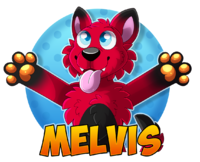 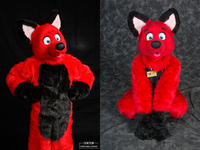 Mark joined the furry fandom when he was fifteen years old in May 2016. His first attended convention was Anthrocon 2016. Upon attendance, he fell in love with the furry fandom and was eager to make new friends in it. Ever since then, Mark has been continuously attending Anthrocon, as well as other east-coast furry conventions. He also attends some furry meetups around Long Island, particularly the annual LIFurs OMGWTFBBQ in Sunken Meadow.

Mark's fursona, Melvis, is a young little red and black timber wolf. He is often cheeky, mischievous, and silly, but is generally warm-hearted and friendly to everyone, always doing his best to hold on to his smile and help others find theirs. He can sometimes tend to be a little shy and nervous, particularly when meeting new people. Being mostly red, Melvis often gets mistaken for a fox, much to his annoyance.

Mark's first fursuit is a full-body plantigrade suit constructed by Kodimade in November 2016. Its first convention debut was at Anthro New England 2017 and continues to appear at furry conventions primarily in the east coast. A second plantigrade fursuit of Melvis is currently being made by That's Furred Up and will be completed by spring of 2020.

While wearing the fursuit, Mark speaks in a high and jolly voice which often tends to crack (either purposely or unintentionally). His performance is almost always hyper, silly, chipper, and a bit clumsy. He's also a major hugger and will give long hugs to as many people as he can.

Mark made a few alterations to his fursuit shortly after Anthro New England due to two discovered problems; the facial expression on the head appeared to be too plain and rather under-expressive, and the bodysuit was too big and loose for him. To fix this, he added small bottom eyelids made of red paper and cut out pieces of fleece shaped into eyebrows, in order to give the face a much more jolly appearance. Mark used to wrap either foam or polyfill around his arms and legs to use as padding underneath the bodysuit to make it fit better. However, it was a slow process to get it on him and it would restrict his body movement. In October 2018, the bodysuit was brought back to Kodimade for a downsize, and now, no padding is needed to make it fit.

For Furpocalypse 2019, Mark removed his fursuit head's normal happy eyebrows and replaced them with thicker, angry looking eyebrows. With this change of expression came a change in his performance as well. He portrayed Melvis as grumpy, angry, and fierce, but still retained his usual silly and over-the-top behavior. The angry eyebrows were replaced with the normal happy eyebrows immediately after.