Melbourne Fur Con is a furry convention in Melbourne. Its first instance, themed "Unity", was held 23-24 February 2019 at the Carlton Scout Hall, with "around 150 total participants", including staff and dealers.[1] It is next to be held for 21-23 February 2020 at the ibis Melbourne Hotel and Apartments, with the theme "70's Retro Sci-Fi!".[1]

The event was announced after ConFurgence's notice that it would not run as a full-sized convention in 2019. Due to the short lead time, no accommodation has been arranged; however, several nearby options are suggested on the convention website. Events are to include a "Sausage Sizzle" BBQ at opening and closing, a dealers' den,[2] fursuit games and a fursuit parade towards a nearby park.

In 2019, the convention supported the Dingo Discovery Sanctuary and the 1st Carlton Scouts, raising "almost $2000".[1] 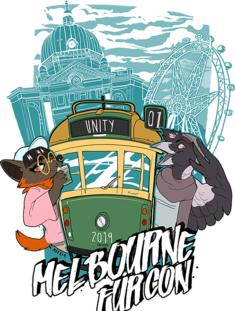 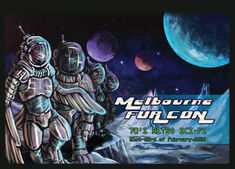 Aside from the convention, members of the group have organized several in late 2018.[3] The partnership's website describes it as "a totally non-profit venture".[4]