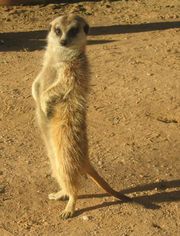 Photo of a meerkat.

The Meerkats (Suricata suricatta) are small mammals native to South Africa. Taxonomically they form the genus Suricata, part of the Herpestidae family (Mongooses).

Almost unknown to the general public, they were first introduced to television viewers in the 1980s in the documentaries Meerkats United and Meerkats Divided. The filmmakers were able to gain the meerkats' trust, resulting in some intimate footage of their daily behavior, and audiences found them cute and endearing.

One popular cartoon meerkat is Timon from Disney's The Lion King. Another being Aleksandr Orlov, mascot for the satirical website Compare the Meerkat.

Another popular show that features meerkats is Meerkat Manor.