Meeran is a furry from the United States of America, and joined the furry fandom in October 2013. He was born in 1998, and is an avid virtual reality and cyberpunk enthusiast, gamer, and writer. Meeran is currently studying computer science as a profession to develop for virtual reality systems; he occasionally assists Wikifur with documenting online furry conventions and attending them as they become a new frontier for the fandom.

Meeran is an anthropomorphic tanuki (Japanese raccoon-dog) with a black and gray fur color scheme, in reference of traditional tanuki yōkai statues. He is often mislabeled as a raccoon due to similar appearance. His signature outfit is depicted with a black leather jacket with blue highlights, shorts, and combat boots. Meeran has 'blue spots' on his hands, which signify cybernetic implants.

He admires driving various cars, and is seen interacting with them in some commissions and avatar screenshots, jokingly dubbed as a 'metaverse getaway driver'. Meeran relaxes by enjoying hot springs and onsens, and Japanese cuisine. Meeran has an affinity for short blades and mall-ninja aesthetic, and carries a custom set of daggers. 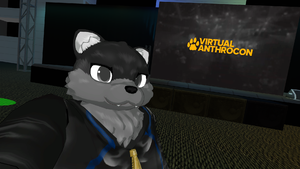 Meeran at Virtual Anthrocon in 2020. Avatar by Milkpot.

Meeran became a furry in 2013, and created various fursonæ in his early years of the fandom. His first convention was Anthrocon 2014: Secret Societies.

In 2017, he created his current fursona, "Meeran". In 2018, Meeran joined VRChat, and other early VR platforms.

In 2020 and 2021, with the COVID-19 pandemic at its peak, furries began hosting online furry conventions as a means to be safe from the virus while enjoying the gimmicks of a convention. Meeran took large interest, and began documenting, preserving, and archiving them, comparing the experimentation with online conventions similar to early furry conventions such as ConFurence Zero in the 1980s and 1990s for future generations to look back upon. He was a panelist during the first Furality Online Xperience where he reviewed the cyberpunk genre to a livestream audience. Meeran was also a room host for Hex Furryfest: Winter Wonderland in December, 2020.

He also volunteered at Megaplex Online in August 2020, where he helped moderate panels, hosted a rave on VRChat with the help of the Tailbass Club, and presented a panel targeted to new convention-goers who have not yet attended a furry convention in person. Later, Meeran was recruited by Florida United Furry Fandom into becoming staff for future Megaplex events.

In 2021, Meeran received his first cybernetic implant, which added blue spots to his fursona. Meeran staffed for Megaplex 2021, and Megaplex 2022.

In November of 2018, Meeran rented the books "Ready Player One", and "Snow Crash" from his local library, which heavily sparked his interest in virtual reality. He received his first virtual reality headset, the Oculus Rift CV1, on December 29, 2018 pre-owned for $225 USD. He primarily has used it for games such as VRChat, beta-testing games for independent developers, and educating veteran convention organizers with general knowledge and information about the platform's potential. Since 2019, Meeran has preached that VR will become an upgrade or evolution to the modern home computer, his claim being that in virtual reality, a three-dimensional space can be interacted with more convenience, compared to a computer monitor or smartphone screen that is two-dimensional.

Meeran believes heavily that an avatar (virtual reality) or 3D model is a great alternative for fursuiting. His reason being that they are cheaper, more dexterous, and will not break and wear out over time. In January of 2020, Meeran then commissioned Milkpot, a professional Japanese avatar and fursuit maker for a total of 245,000‎¥‎. The Milkpot model is the avatar that Meeran uses to this day.