Me-Me, also known as Maid Amalthia Milking or Maid A Milking (born in Oct. 1986), is female furry artist who frequents furryMUCK and FurAffinity.

Currently a student, she is aspiring to make her own comics and become a vet tech. Me-Me is a procrastinator, a pervert, and a snob at times, but is generally fun to be around. 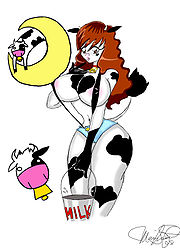 Cows jump over the moon?

Her fursona is Maid A. Milking, a female Holstein dairy cow created out of a desire of her player for bigger breasts her player, and because of a deep rooted appreciation for the under-appreciated cow, after watching a rather gory video of a meat factory.

Maid aspires to be an opera singer but finds difficulty getting into the business because her breasts are so large they constrict her lungs making it very difficult for her to hold long notes. Despite this setback she refuses to get a reduction and performs anyway she possibly can, even if it's just at local Karaoke bars.

Maid despises chewing gum but finds it a preferable alternative to cud. She is always seen chewing the stuff (the gum not the cud), much to her chagrin, and constantly blows bubbles. Her favorite flavor is Cotton Candy, but don't ever offer her a piece she will resent having to take it.

This is one of her major draws as she is constantly lactating and in need of milking at least once a day. She works at a dairy farm where she converses with her fellow cattle as she is milked, but after a while found herself very attracted to the warm liquid and began secretly milking herself for pleasure.

Her milk is a combination of mocha and hazelnut in flavor, and when drank straight from the breast will cause growth of the sexual organs and/or erogenous zones.

Maid while a bit stuck-up at times is probably one of the nicest furs you'll ever meet. She's giggly, bubbly, playful, outgoing, sensual, and all around very sweet.

The only time she really gets irked is when she has to deal with hypocrites and liars. It takes a LOT to annoy her, thought there are a few who have succeeded. She takes her time getting to know possible sexual partners but nearly kills them when she finally does let them in her bed.

She is slightly repressed sexually, making her go a bit hog-wild when she does get it.

Maid loves clothes but is very immodest so she compromises by wearing as little as possible in original ways. Her favorite outfit is composed of a pair of black suspenders that cover her nipples and booty-shorts with platform sandals.

Amongst her other outfits are a mono-kini, a french maid uniform, and a Swiss Mountain girl outfit.

Perhaps she needs to take it down a notch and find a happy medium? Well, she's never received any complaints... She is borderline lesbian, but finds she adores Hermaphrodites as they are the best of both worlds, limiting her time with males as they tend to be a bit less giving.