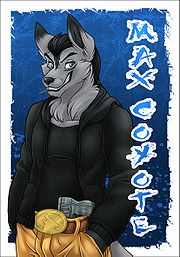 MaxCoyote, full Maxfield E. Coyote, also known as MaxYote and Amaterasu419, and as Maxine Zeno and Maxfield Mathys on Second Life, is a furry fan who lives in Seattle, Washington, USA.[1] Max is in a relationship with Kilwillae.

In the mid to late 1990's, Max was on YiffNet and attended Further Confusion 2009. After personal issues, he disappeared from the furry fandom between 2000 and 2004, during which time he became a fan of Japanese anime.

Max is one of the veteran furries on the game Second Life, having started playing in late 2004. He became close friends with the furry Tinintri. Together, they helped found the online club known as AnthroXtacy. In late 2008, Max left Second Life for good and concentrated his furry life on Fur Affinity.

Since leaving AnthroXtacy, Max has spent his time getting to know others on Fur Affinity, as well as commissioning several artists on FA. To this day, he remains good friends with the majority of AnthroXtacy's founders and still takes part in some of its decision makings when it comes to out of Second Life activity.

He has commissioned several artists in his history with the furry fandom, more recent ones including Elton Portilho, Marmalade Blue, xpray and other well-known artists and reportedly has plans to add more commissions to his repertoire. He also plans to start attending furry and anime conventions, to help make new friends within the fandom, beyond the internet.

Max describes himself as a "full time gamer otaku and part-time Greymuzzle furry".

Max's initial fursona was Maxine Zeno while on Second Life. Max changed his fursona's name to MaxCoyote, and gave the exclusive character rights of Maxine Zeno to his friend Tinintri.