MavWolf (real name Jason Howard; born September 1, 1984)[1] is a fursuiter who resides in Chattanooga, Tennessee, USA.[1] He is a licensed EMT who is a staff member at the furry conventions Fangcon and Furry Weekend Atlanta, ensuring a safe and enjoyable con experience for all attendees.[2]

MavWolf officially joined the ranks of the furry fandom in 2005, but has been a furry since childhood. Having volunteered multiple years at Furry Weekend Atlanta, he joined their security staff in 2013 and has also been on staff at Fangcon in 2012 and 2013.

MavWolf's fursona is a black and red dragonwolf (the hybrid of a black wolf and a fire dragon). He has a white Star of Life on his left arm, showing that he is always an EMT. On his back he has a large white Punisher skull which has caused him to be called The Punishfur. His other markings are four white claw marks which are bilateral on his legs. 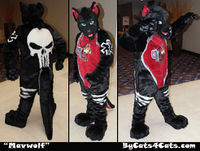 Debuting in 2013 at Midwest FurFest, Mav's fursuit was created by ByCats4Cats and built by Snap E. Tiger.