Massugu ni Ikou is an anime featuring talking dogs as the main characters based on a manga of the same name.[1] The anime alternates between chibi and traditional styles.

Massugu ni Ikou follows the adventures of Mametarou, a mixed-breed dog, and his girlfriend, Hanoko, a Kishu, in Japan with their owners and other dogs.

A male mixed-breed dog, age 3 years and 7 months (at the beginning of the series). His main occupations are the well-being of his owner and his girlfriend (Ikuko and Hanako), as well as helping other dogs. He is ashamed to admit his impure lineage to other dogs, however, he learns to get over it.

A purebred female Kishu, the girlfriend of Mametarou. Her love of Melonpan, a Japanese pastry, often gets the better of her. She has a caring, though naïve personality.

A female (though her tone would suggest otherwise) Dachshund with a foul mouth and short temper. She is quick to yell at those she doesn't like. She also has a crush on Sebastian (the Yorkshire Terrier)

A male (though his voice and wardrobe would suggest otherwise) Yorkshire Terrier. His intentions are positively intended, though his lack of experience in the outside world and short stature hinder him.

A male crow whose sole interest is gossip and espionage. Claiming that there is nothing in the universe that he does not know, he is ready to inform anyone who is willing to listen, though sometimes he can be wrong.

A spoiled male Shihtzu that Mametaro met when he was trying to get home in rainy day. At first, he insisted that he was human. Mame and friends tried to convince him that he was a dog. In the end, he thought he was a cat. 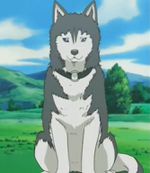 A quiet male Siberian Husky with one eye darker than the other. An impulse buy by his owner, a new home is found for him in Hokkaido after he grows too big, and his owner's interest in him grows too small. He expressed envy for Mametarou's owner's love.

An egotistic male Rough Collie. Imported from Great Britain for breeding purposes by his owner, he speaks broken Japanese with English words thrown in to fill the gaps. He expresses his disdain for mixed breeds, that he doesn't need friends, and his love for Hanoko. He is not particularly liked by his owner, however, as she refers to him as "it".