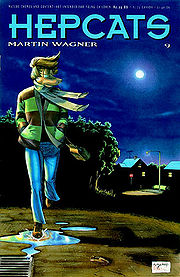 Martin Wagner (born April 27, 1966) is an artist, cartoonist, and filmmaker who lives in Austin, Texas. He spent his childhood living overseas, in such locales as Dubai, United Arab Emirates, and Singapore.

A film major at the University of Texas at Austin, Wagner began Hepcats as a comic strip in the college newspaper in 1987. Starting in 1989, he self-published it as a black and white comic book series. Although the series received critical praise, the combination of poor sales, Wagner's lack of business experience, and his divorce in 1991 contributed to financial difficulties. His production schedule became increasingly protracted and he ceased publishing the series altogether following issue #12 in 1994. In 1996 he made a deal with Antarctic Press to republish the existing material, to be followed by new issues, but the only new material published was a special "#0" color issue.

Following his departure from the comics industry, Wagner illustrated children's books for an Austin-area author and began a new career working in Austin-area film and television commercial productions. In 1999, Wagner produced some early conceptual drawings for director Robert Rodriguez (who was also a cartoonist at the University of Texas at the same time as Wagner) for his film Spy Kids, though he did not work on the film during production or any of its sequels. In 2005, Wagner directed a 24p high-definition short film, Tremendous Risk for Mr. Ferdico.

Martin and Tiffany Wagner were guests of honor at ConFurence 1, held in 1990.