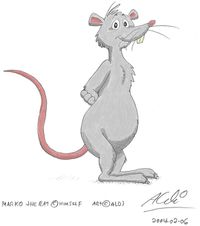 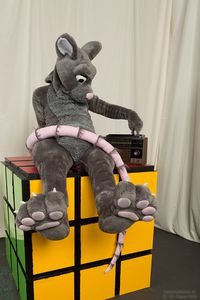 Marko the Rat dressed as Rattus.

Marko the Rat (born September 28, 1971[1] - died March 7, 2018)[2] also known as Marko T. Rat and Haal, was a fursuiter and plushophile, and member of the Westhaven furry household in Mount Gravatt, Brisbane, Queensland, Australia. He was the life partner of Ristin. On March 7, 2012, after living together for over seven years, the pair registered their civil partnership soon after it became legal in Queensland.[3]

Marko's fursona was a rat, of the species Rattus norvegicus, and he felt an affinity to this species even before he identified himself as a furry. In real life, Marko and Ristin kept two non-anthro pet rats,[when?] Izza and Bo, but they are both since deceased.

Marko's first fursona name was Haal Serkonov, but he mostly went by the name of Marko. On Second Life, he played a grey rat character named Haal Ratner.

Highlights of Marko the Rat's furry history include:

Marko attended the following furry conventions and events (with milestones at each noted):

Marko also attended several furmeets in the Brisbane area. He fursuited in public parks and considered himself to be a "fandom ambassador", explaining the furry fandom to passersby.

Although Roophilia has been replaced by a web 2.0 presence, he continued to enjoy dabbling in photography and often visited Lone Pine Koala Sanctuary, where he had an annual pass.

Marko collected plush toys and accumulated quite a large collection. He was unable to sleep comfortably without plush. He was a full blown plushophile, though his main focus was cuddling them while he slept.

Marko passed away peacefully after a battle with cancer.[2]