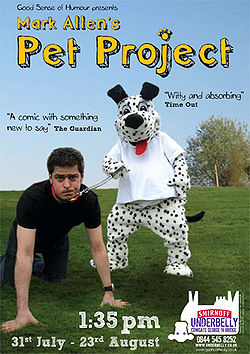 Mark Allen's Pet Project is a stand-up comedy show about furries, written and performed by British comedian Mark Allen. The show came about from Allen's attempts to understand the relationship between humans and animals. During his research, he learned about furries and decided to "infiltrate them."[1]

Because of the wariness that most furries have with people outside the fandom, Allen bought himself a Dalmatian dog fursuit.[2][3]

In his show, he talks about how he competed in a "Fursuit Olympics" and talks about, "learning about tolerance anew". His show also features film footage of his visits to furry activities.[3]

On December 9, 2008, Allen wrote about furries in a sex-based article for TimeOut London. The article focused primarily on fursuit sex, however noted that this was a minority in the fandom.[4]

The last date the show will be performed will be on 11 May 2009, at Fletch, St. Andrews venue at the Brighton Fringe.[5] A special discount price is being made available for furries.[6]

Chortle.co.uk gave the show 3 out of 5 stars saying, "Though it's all wrapped up a little too pat, his ultimate comparison of the pet-owner relationship to a hostage situation is exceptionally well delivered."[3]

Fest were more critical, giving the show 2 out of 5 stars writing that, "Let's not be too harsh on Allen. He is a funny guy, who could handle traditional stand-up if he wanted. The question he has to ask himself is whether slideshow comedy is for him. For this type of show to work, its subject needs to be acutely observed, the transition between topics needs to be seamless, and there needs to be a constant stream of laugh out loud moments. Allen's presentation has none of this. His performance style is far too laid-back and sloppy. A disappointing show."[7]