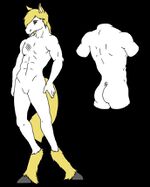 Another example, this time by himself and a bit more humanized. 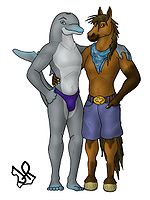 Horses are a very common species of animal in the real world. Domesticated horses play an important role in the human history. The adjective referring to horses is equine.

Horses are large, heavy, hoofed mammals. They are herbivores, and feed by grazing, commonly on grass.

Despite their large size and weight (up to 2500 pounds, or 1134 kg), horses are generally thought of as gentle creatures; however, their hooves can cause great damage by kicking or trampling.

The fur of a horse is mostly very short, forming an almost skintight covering, except on the head and back of the neck, which grows long into a formation called the mane; and the tail, which is specialized in horses for protecting the rear from flies: it has a bunch of long, very fine hairs which are swiped to disturb the flies. Horsetails are prized for their silk-like hairs.

A mule is the offspring of a male donkey and a female horse. The much rarer successful mating of a male horse and a female donkey produces a hinny. The offspring of a zebra-horse cross is called a zorse, zebroid, horsebra, zebrula, or zebrule; "zebra mule" is an older term, but still used in some regions today. The foregoing terms generally refer to these hybrids. Hebra, zebrule and zebret all refer to the cross of a female zebra with a male horse.

The horse is largely a domestic animal and has been bred for centuries. The species which produced the horse no longer exists in the wild, although some wild horse species exist.

Horses have been selectively bred to enhance various qualities, enabling them to fulfill various roles in their work for humans. Draft horses are bred for power, and are thus large and heavy; show horses are bred for grace and beauty; racehorses, for speed.

In furry artwork, anthro horses are often represented with hooved hands - either as full hooves that are somehow able to manipulate objects, or as more humanoid hands with hooflike nails.