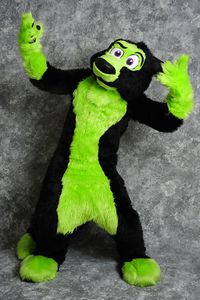 Mangusu (born April 24, 1989) is a fursuiter, fursuit maker, dancer, and furry artist who is originally from Orlando, Florida, USA, and currently resides in the UK. His fursona is a mongoose.

Mangusu is well-known for his dancing feats and videos on YouTube featuring his fursuits. He is often titled as the "Mongoose King." Working mostly in traditional and digital media, Mangusu occasionally posts submissions to various art archives. In 2009, Mangusu began posting his own humorous comic strip, "My Side of the Fandom".

He has been noted for his sense of charisma and talent for embodying his own characters. He has ran a few of his own panels including the entertaining Furry Dating Game, Furry Vines, and Posing in Fursuit. Mangusu has also DJ'ed at a convention dance and gained attention for his fursuit. He was invited to CFz 2012 as Guest of Honor (GoH) with musician Colson Grainger. His dancing style has been described as sassy by many, which has won him more third place rankings than any other performer.

He has also made a few fursuits, such as Chopper, who is a Reindeer from the anime series One Piece and Daxter, who is an "Otsel" (otter/weasel hybrid) from the video game series Jak and Daxter.

Tac is a blue rockstar cat with dead-like eyes and 'amazing hair'. It debuted at Furloween X and is inspired by Gorillaz cartoon vocalist, 2D. Tac has trademark actions, such as crawling in a spastic manner across convention carpets or bending over backwards. It's often considered to be a zombie fur by his appearance and undead antics. The true story behind this behavior is attributed to Tac's unstable soul prone to frequent possession by free roaming spirits. Work has occurred over time on the suit portion. Its head was remade and limbs were extended. Currently, the suit has been retired and disposed of due to age and wear-and-tear.

At FWA 2009, Tac exhibited several dance performances including his first place winning performance at the 'Furries Got Talent' show.

Tac has also made an appearance on the Funday Pawpet Show, as a subservient alongside Sly Phox.

At AC 2009, Tac made two more performances. One of them was a well-received dance performance at the Furry Masquerade entitled "The Evolution of Furry Dance," which included several music tracks held in high notoriety by the furry fandom. Tac also took part in the fursuit dance competition dancing to "Me Against The Music" by Britney Spears and Madonna.

At FWA 2010, Tac got second place in the dance contest performing a tango-esque dance. He also performed a skit with Sly Phox and Indi Jackal to the popular Weebl and Bob song, Amazing Horse.

At AC 2010, Tac stunned the ballroom audience at the Masquerade by having his act as the finale. Tac presented "The History of Dance Part II" and received a standing ovation. Tac also danced a Tecktonik-inspired performance in the fursuit dance competition.

On July 19th, Tac returned to the Funday Pawpet Show with the debut of Zeke Husky.

Later, Tac was worn less frequently. The fursuit made several more appearances in videos, but never publicly. As of September 2014, Mangusu announced the entire partial suit was retired and disposed of. However, despite this, he still maintains a Twitter account for the character.

MonsteRoo is a SodaRoo that debuted at FWA 2011. It was self-constructed by Mangusu and well-known for the exaggerated raised eyebrow expression and rude demeanor. It was inspired by the city of Atlanta and hip-hop idols such as Missy Elliot.

His first entry to the dance contest with MonsteRoo earned him first place at FWA 2012. At the same convention, he performed a choreographed routine with Zell to "Let's Do it" and also won in the talent show for this. At AC 2011, he recorded a dance montage video on the convention center's roof featuring several fursuiters. Its success reached over 140K+ views, and has since became a tradition.

MonsteRoo appeared in the furry Harlem shake video and on an episode of the Funday Pawpet Show.

Its popularity lead to difficulties being associated with its creator. With its design of heavy padding and low-cut torso, its dancing was inhibited. In summer 2013, Mangusu auctioned MonsteRoo, who is now currently owned by Melhelmeh.

This suit represents Mangusu's royal mongoose fursona. It was commissioned by Phoenix Nest Suits, and features a clever smirk and mechanical cog symbol on his back. Mangusu was received in September 2014, and has created multiple music videos and numerous dance competition performances. Its personality reflects his royal essence and struts with a glamorous form.

Mangusu has performed in other suits due to lacking an available fursuit or requiring more mobility for his act.

Mangusu met Dash Tiger while attending CFz 2012 as the GoH. After meeting extensively, they decided to live each other to avoid a long distance relationship. The two commissioned their suits from Phoenixwolf33 and have a classic tall-and-short dynamic when collaborating on "Dash and Mangy in the Morning" video series, which is based on a running joke in the comedy show and community. It's also a furry discussion and interview web series. The two officially married in America in 2015.

Other personal life events are recorded on his Twitter and FA to document his experiences.

Mangusu also travels. After meeting his partner he moved from Orlando, and lived in London and Brisbane, only to move back to Orlando. Later, he moved to Columbus and then to the UK.