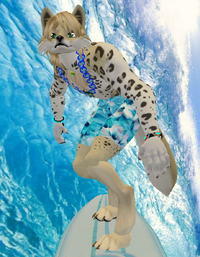 Mako Minogue is furry fan who lives in the USA. His fursona is a wolf. Mako is mated to Wolftribe Karura.

Mako is the owner of four of the Fur Valleys sims on Second Life: Wolf Valley, purchased from Kithylin Perth in July of 2006, Jaguar Valley, which came online in January of 2007, as well as two "Homestead" sims: Skunk Grove and Etoile-G, a private sim, rented out to Spiked Punch.

Mako is also a former manager of Serenity Woods (with Kerwin Newall as the financier). Kerwin purchased SW in June of 2007, then sold it to Curt Pascal five months later in November.