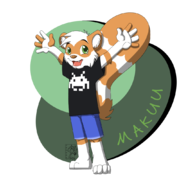 Makashiro Hideki Swiftpaw, also known as Makuu, is a furry who lives in Santiago, Chile. His fursona is an orange raccoon.

Makuu was born to Jale Amadeus Swiftpaw and an unknown mother. According to his father, she died when she was giving birth to Makuu. The two have been living together until his father enlisted in the army. He was under the care of his uncle, Tsubaki Nykohara, since then.

Makuu has the normal life of any kid his age. He is known to love anime and Nutella spreads with a passion.

Makuu is a little orange raccoon with green eyes and a very fluffy tail. He was born in 1996.