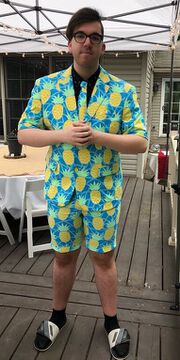 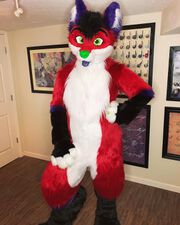 Majira in Majira fursuit v.3.0, and his contemporary design since 2018

Majira Strawberry, also known as Majira Coyote, Majira Cherry, or simply Majira (real name Kyle Summers; born June 18, 1996), is a fursuiter and YouTuber originally from Akron, Ohio, USA, who lives with Kiwi Fox in Seattle, Washington and is currently dating with them.

Outside of fursuiting, Majira wears glasses and is also famous with his signature hipster-style glasses like his non-furry Youtube channel. However, his second fursuit (the first one entirely by Mischief Makers) came with yellow shades with blue lenses (similar in shape to his regular glasses) as an accessory that he would occasionally wear. 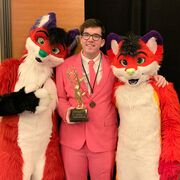 Majira holding the Anthronational Film Festival 2018 award, standing with two of his fursuits 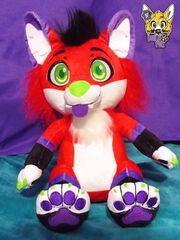 Kyle first joined the furry fandom in 2010. He is a staff member at AquatiFur and Painted Desert Fur Con.[citation needed] On Nov 10, 2018, Majira was awarded the Anthronational Film Festival 2018 award that was mentioned in his video We Won A Furry Film Award on Youtube.

Before becoming known as Majira in the fandom, his fursona was a wolf named Wolfrik.[1] Around 2013, however, Kyle retired using Wolfrik as his fursona in favor of his current and more recognizable fursona Majira Strawberry which he continues to use today.

Majira's present fursona is a red fox. His tail is colored red, purple, green, and black.[2] His facial features contain greens eyes, a lime green nose, and a purple tongue.

Majira was originally fully coyote before confusion about his species led him to become a coyote-fox hybrid. Majira strives for a look that is cute yet trendy.[3] In the spring of 2018, he redesigned his fursona, giving him black paws with white toes and fingertips and now with both of his irises green and his ears fully purple on the front but red on the back.

In 2020, he created a gray wolf character named Kyle, after himself, with the help of Zillion Ross. Kyle was announced in a vent post on Twitter about how he felt Majira was only a character he played rather than his fursona.[4] Kyle replaced Majira only as a representation of himself, rather than on YouTube or his popular social media.

Kyle first joined YouTube on September 22, 2012, as a vlogging and skit channel unrelated to the furry fandom. Referred to as Kyle Summers, he uploads similar content on it as his furry channel. In addition to this channel, he also maintains a secondary non-furry channel called Kyle Winters, where he uploaded his completed school projects before he graduated. Despite his massive rise in popularity as a furry YouTuber, Kyle does wish to revive Kyle Summers as a way to diversify his content.

On June 4, 2014, Kyle started his furry channel but didn't pay much attention to it until January 9, 2015, when he uploaded his first video on the channel titled Majira's Fox Transformation.[14] He currently has over 100 thousand views on it as of January 2020. His content consists of skits, parodies, instructional videos, and collaborations related to the furry fandom. As with his non-furry work, Majira maintains a secondary channel called Majira Peppermint, where he uploads various other content that relates to him as a furry, but is otherwise used in a "behind the scenes" format.

As a furry YouTuber, Majira often has a chance to collaborates with like-minded YouTubers and influencers such as Echo Oblivion, Beagle.in.red, TwitchDaWoof, Kero The Wolf, Bolt Mutt, Splat Fennec, Nos Hyena, Baby Blu, Fox Amoore, and Kothorix, among many others.

On July 24, 2018, he posted the video FURRY SILVER PLAY BUTTON UNBOXING (100,000 Subscribers Reward) on Youtube announcing that he had been awarded the Youtube Silver Play Button Award for surpassing 100,000 subscribers. 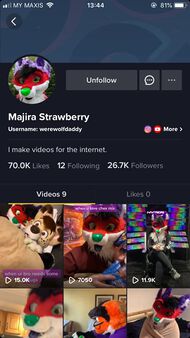 A video which featured Majira and Arrin the Wolf supposedly eating Tide Pods as a pizza topping, making "Forbidden Fruit Pizza", which was originally uploaded on December 30, 2017 caused an outcry and raised safety concerns by the public and the media on whether or not the video was encouraging people in real life to eat detergent pods that look like candy.[citation needed] This was a part of a much bigger controversy revolving around a meme where people were challenged to eat Tide Pods and ended up dying for/from it.

The article was included in a Flayrah article seven days after the video was uploaded.[16] On January 12, 2018, the video was removed for violating YouTube's policy for harmful or dangerous content.[citation needed] As of 2019, a YouTube safe version of the Tide Pods video can still be viewed on Majira Peppermint. [17]

On January 7, 2019, Majira was asked by h3h3Productions (also known as h3h3 or h3) to do a podcast about the furry fandom. He agreed and was scheduled for March 1, 2019. Despite fans and friends[who?] of Majira saying that he should do the podcast, there was a massive backlash where many in the fandom[who?] demanded Majira cancel his appearance due to h3h3's controversy regarding transgender people,[clarify] as well as concerns over the fandom going mainstream.[clarify]

On February 21, 2019, Majira announced that after listening to the concerns of the community, he decided to back out of the podcast and apologized for any grief he caused.[18]

On December 16, 2018, He had uploaded an attack video against Gamers during the beginning of the Gamers Vs Furries Wars on his TikTok account featuring Frankie x and him flossing, dabbing, and performing Fortnite dances. Later on, Majira did the OK gesture[clarify] before the end of the video. However, after a few months, he deleted this video to prevent from getting involved with The Furry Wars, Furry Drama, and Gamers Vs Furries Wars. However, his deleted TikTok video recording process can still be viewed on the post Furries vs. Gamers: War on TikTok (w/ Frankie x) on his Youtube Channel.