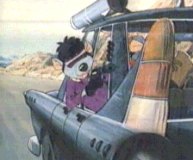 Macskafogó or Cat City (1986) is a 137 minute long Hungarian cartoon movie that was presented in color in Hungary, Canada, and West Germany (before Gorbachav took down the Berlin wall in 1989). The title itself translated roughly means 'cat catcher'. It has many different themes meshed into it that parody Disney (Mickey Mouse), some Warner Bros. references (Planet X), George Lucus' Star Wars, etc.

The cat race is the one that controls the most power and intimidation, and yet co-exist with the mice culture in the city of Pokyo. The cat culture best reflects the American culture in a negative light. The main cat character, Tejfel, on the front movie cover suggests a somewhat 'Scarface', cross with a pirate, cross with Ian Flemming's Doctor No(the mechanical hands).

There is a hero that is suppose to restore order to the city named Grabowsky (a play on the word 'grab' or 'catcher') who is supposed to stop the robberies in the city and be the protector of the mice race. An evil gang of cats does not want Grabowsky to interfere with their plans, and will use whatever resources to stop him such as the employment of the Four Gangsters.

Tejfel, however is considered number 2 in the organization of the cat gang. He answers to a higher source of power in a very similar sense of the S.P.E.C.T.R.E (SPecial Executive for Counter-intelligence, Terrorism, Revenge and Extortion) orginization.

The hero has been asked to save the world one more time to make sure a WMD can be produced to stop the evil cat society. At te same time, the cats are paranoid about this weapon becoming active and destroying their thirst for power, backstabbing way of life.

Tailing him is sidekick Seno-san, the assistant to the scientist who basically has the role of the 'Bond girl' in the movie. The romance element is a parody really of all the James Bond movies ever produced, where all of the other girls Bond would sleep with die in some unspeakable way, except the one who sticks with him through the end of the movie. It is unknown what Senosan assisted the scientist with, and its hard to imagine in a sterile lab environment a girl running around in a kimono. 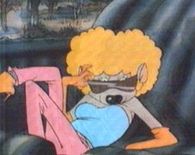 The group of rats known as, "The Four Gangsters" (Burns, Bones, Cookie and Candy.). Four different sociopathic personalities that talk extensively about killing mice. Cookie has a flare for serving up mice victims in the kitchen with seasonings, some sandwich spread, and usually a knife. Bones has a talent for taking on disguises to scare the life of his victims. Burns wears a more militant costume, similar to the soviet era uniform, and likes to torture the mice. And lastly, Candy is a bit of a seductress; she walks by in a park scene to get the attention of a skirt chasing mouse, to turn around and shoot him point blank in the head. They're great at giving about a three and a half minute long song in dance, however their performance in the field is not nearly as professional.