MNFurs is a group that offers resources to aid the furry community in Minnesota which directly sponsor events mostly in the Minneapolis – Saint Paul Twin Cities metropolitan area; and offers online communication resources for greater Minnesota.

Minnesota Furs (MNFurs) evolved from a small, Twin Cities based, bi-weekly furmeet known as the SNCFurs[1] which started in 2002, which in turn had spun off from the now-defunct Frozen Furs.[2] The original attendance of the SNC meets and small events were less then a dozen people, and has since evolved to a community which supports indoor and outdoor events from 20-125 people and regular bi-weekly meets ranging between 30 to 60 people.

In 2004 the SNC Furs held the first annual picnic which was the start of evolving the group to something bigger. It was their first event with over 50 people in attendance and the groundwork for MNFurs as it is today. The official transition over to the MNFurs namesake was made in 2006, with MNFurs.org registered on 7 August 2006.[3] In 2007 a basic community website was created which was re-made in 2010 to support the growing online presence and communications channels MNFurs supports today.

At the end of 2012, MNFurs took a step forward and started to file the paperwork to become a non-profit. The work is expected to be completed by the end of 2013. This step was done to better work with other non-profit fandom groups in the Twin Cities and to also provide a solid base for the upcoming convention.

Late 2020, In a move to modernize their online platform for people to stay connected (especially in a time of events being cancelled because of COVID), MNFurs created an official Discord server[4] for their members to hangout.

As well as Furry Migration and Werecamp, MNFurs runs smaller annual events such as the MNFurs Holiday Party (which attracted 53 fursuiters in 2018) and the MNFurs Spring Picnic.

The annual MNFurs picnic is held at various different parks in the Central Minnesota area in the Spring and Fall. Attendence is free but special artwork badges are sold to help fundraise and offset the cost of renting the pavilion. In addition to a printed badge, different merch is available for sale sporting the MNFurs / Furry Migration name. Activities include socializing, potluck, yard games, fursuiting and a group photo. 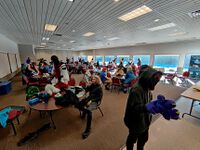 Typically, once a month, The organization holds a social meet at the Roseville Oval Skate Park (1309 County Rd C West #1171, Roseville, MN 55113). This event is free to attend. Activities include light potluck, socializing, tabletop gaming, fursuiting, and a group photo. 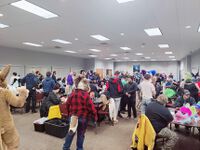 Once a year, around the month of Janurary, MNFurs hosts a Holiday party to celebrate the holidays and the new year. The event takes place in January to avoid other holiday events and plans by the community. Fundraising for MNFurs comes in the form of merch sales and a limited edition printed badge featuring artwork from the local community. Events include a photo studio, group photo, potluck, board games and in some cases, a holiday gift exchange.