Lynx Wylde is a character in Extinctioners. 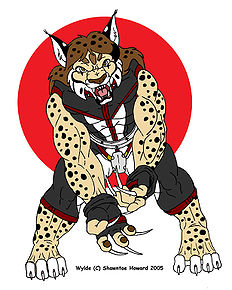 Lynx Wylde is a feral, a humanimal with a strong connection to their ancient predatory nature. He believes that predators should hunt their prey, just like their ancestors did. Those who are too weak to stop him get what they deserve and deserve what they get. Lynx is violent, vicious, and bloodthirsty who puts no value on humanimal life. He is, pure and simply, a psychopath.

Lynx is a hybrid who has diamond hard razor sharp claws that can be extended up to a foot out from his finger tips, a regenerative factor and is stronger, faster, and otherwise physically superior to others of his type.

After being arrested and jailed for the murders of multiple female humanimals, he was freed due to a technicality, he vowed revenge on Cassie Collins, the prosecutor who almost put him away and attacked her in her home, but was stopped by her efforts as well as the efforts of her police-appointed guardians. Lynx was successfully tried for the murder of Amanda Risteard and attempted murders of Cassie Collins, Domino Doz, and the two detectives and sentenced to death. However, the night before the sentence was to be carried out, he was teleported out of his prison by another hybrid, Bajer Blaquestrype, leaving a bloody scene in his wake.