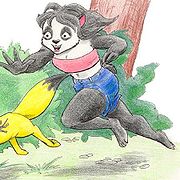 Lynn Onyx, from a picture by Louis LeClerc.

Lynn Onyx is a female werepanda character played primarily on FurryMUCK, but sometimes on Tapestries and other MUCKs. Lynn's biggest claim to furry fame is the creation of the smell program on FurryMUCK.

The name "Lynn Onyx" comes from a sprite-like creature that rode a ki-rin in a long-running AD&D campaign created by Lynn's player. The name was originally spelled "Lin Onyx."

Centuries ago, Lynn's ancestors were normal humans in China who were the best bamboo farmers around. A rival paid a witch to curse them, turning them into werepandas when the moon was full. This soon led to financial ruin, since they ate all the bamboo they'd grown, instead of taking it to market.

An only child, Lynn was born in San Francisco (or the equivalent, in the vaguely Earthlike setting of FurryMUCK), where her parents still live. Currently, she's 18 1/2 years old, and has been for the last 15 years or so.

Lynn has a huge number of cousins, all werepandas. The most notable of these is Jade Onyx, her taller and bustier cousin (who can be found on Tapestries); another named cousin is Sard Onyx, but he hasn't been seen in quite some time.

Lynn's only magical ability is shape-changing. Her inborn abilities allow her to shift between her three primary forms: a young Asian human, a fur-covered anthropomorphic pandagirl, and a cuddly non-morphic panda.

Over the years she's picked up and lost additional shapes. At one time, splashing her with different temperatures of water could shift her gender (even though her player has no particular interest in Ranma ½), but this is no longer the case. For a while, she could assume a number of crazy forms, ranging from a Dodge Dart to a dragon to a donut. Most of those forms have also been lost with time.

In general, she can't just assume any shape she wants, but if someone else transforms her, that shape is added to her repertoire; she's always able to shift back to her three default states, if desired.

Lynn's cache of special equipment includes a Ring of Size Control and a Big Book of Rather Dubious Spells. She used to own a Pandazooka, a weapon that would turn other people into morphic pandas, but apparently that's been misplaced somewhere.

On FurryMUCK, Lynn is the proprietor of the Panda Palace Bakery and Donut Shoppe. The Panda Palace was home to several flame boards for a while, including FurryMUCK's first "overflow" bulletin board for unwanted flames, but those were removed a few years ago. The Mini Bar, a seldom-used microphile hangout, is located above the Panda Palace. The Panda Palace can be reached by taking the stepdisk just south of the South Corner of the Park and going west on Shiner street, or by using the pp teleport destination.

Lynn's home is located close to the center of FurryMUCK, and can be reached by using the stepdisk to the east of the East Corner of the Park. At times, her friends have been boarders in the converted lofts on the second floor of her Japanese-style house. Her closet at home contains many identical sets of clothes: pink tanktop, and blue-and-white-striped shorts.

Lynn Onyx has a MUCKER 3 bit on FurryMUCK, but has not programmed MUF for a while. In August 1991, she created a smell program as a joke, adding an extra sense besides the look command. This proved to be much more popular than she expected, and it was soon made a global on FurryMUCK. Lynn provides free copies of the smell program to MUCKs upon request, and the basic functionality has been replicated by other coders.

Lynn is sometimes seen in the Giants' Club or the West Corner of the Park, but usually just chats on the scream channels. Outspoken and often stubborn, Ms. Onyx has gotten in many arguments with FurryMUCK wizards and other players, and has been temporarily banned from the MUCK a few times. She made one tiny cameo in Groat's WCOTP comic once. [1]

Recently, Lynn has been seen in the company of a certain cheetah girl.

On Taps, Lynn is basically the same. She doesn't program on Taps, but she does have an extradimensional picnic basket that allows her to reach down inside and pull out anything she needs from the Panda Palace on FurryMUCK, which is usually donuts. Lynn tends to hang out in the main plaza of town.

Lynn's player is a former web developer who now works as an editor, writer, and photographer in Tucson, Arizona, U.S.A. Lynn doesn't consider herself a furry fan, but rather a mudder who stumbled onto FurryMUCK and decided to hang out. Lynn attended one furry con way back in the day, and isn't against associating with furries, but furry fandom isn't really her thing.

Besides the aforementioned Jade Onyx, Lynn also plays the giant vixen Rio Grande and a few other characters on FurryMUCK and Tapestries.