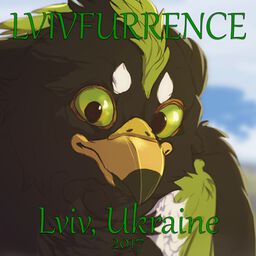 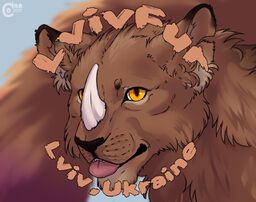 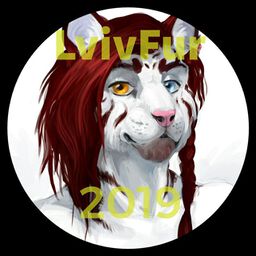 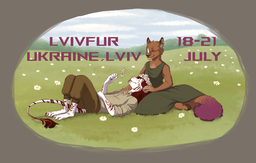 LvivFur (initially LvivFurrence - Львівфуренція) is a furry convention held in Lviv Oblast, Ukraine. While primarily attracting Ukraininan-speaking locals, the event has also attracted visitors from Russia, the UK, and Belgium.

There appear to have been prior furmeets in Lviv in 2015 and 2016, involving walks with ten or so furries and one to three fursuiters.[1]

LvivFurrence 2017 was held 20-23 July 2017 at the "Chotyry Pidkovy" motel in the village of Pidberiztsi, Pustomyty Raion.[2] There were 28 pre-registered members,[3] and at least three fursuiters.[4] The convention mascot was a green hawk.

LvivFur 2019's chosen mascot is Saito, which appears to be a white tiger (or possibly a liger) with dark red stripes, red/blue hetrochromic eyes, and a pink heart on his thigh.[8]

WUFF 2019 was deferred to 2020 due to national safety concerns; and as late as March it was not clear whether LvivFur would be postponed as well. However, on 4 April it was announced that LvivFur 2019 would take place 18-21 July, at the Hotel "Mirage" in Sudova Vyshnia.[9]

As of 2018, the founder and lead organizer was Green Lion (ru), while his deputy ("right paw") was Persius. Ulfrun was listed as commandant, and Ksanshie as a consultant.[10]