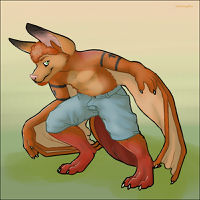 Luther Vogt is a furry whose fursona is an anthropomorphic Pallid Bat. He is an avid fan of anything involving growth or sizeplay, and tends to travel within those circles.

Luther is a somewhat well known hyperfur and macrofur as well as a writer, and has written a good number of short stories, mostly involving the growth of his friends' various characters as well as a longer serialized work known as Isla Kinoa. He normally takes story requests and trades from time to time. They can be found on his Fur Affinity page.

On F-List, he owns and operates the Growth group and frequents the site's various channels.