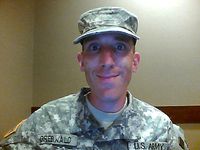 Lupine Assassin (real name Allan Greenwald; born November 10, 1971), is a furry commissioner and music mixer from Brooklyn, New York, USA. His fursona is a black wolf wearing a red bandana and black headphones around his neck.

Lupine Assassin joined the U.S. Army in May 2009, shipping to Fort Benning, Georgia for Initial Entry Training. After getting injured he received an Entry Level Separation in December 2009.

He is living at his mother's house until he can get a job and move out.[1]

Lupine Assassin was banned from Fur Affinity at the end of February 2009 for using money gleaned from others as a donation to purchase commissions.[2] He was banned at least twice after this incident.[citation needed] After joining SoFurry, he posted an apology for the incident on his journal there and on DeviantArt, and his offer to donate $500 to Fur Affinity, stating that he had "an addiction to art."[3] Comments to the post were largely derisive and concerned demands for refunds of donations.

Lupine Assassin said he would refund donations made to him,[2] As of September 2010, he claims all of the people had been paid back, but there are a few individuals[who?] who insist they have yet to receive repayment.[citation needed]

Lupine Assassin submitted multiple DMCA takedown notices to FurAffinity asking every drawing portraying his fursona to be deleted, even if he didn't hold the copyrights for the artwork. Dragoneer opted to remove every commission drawn for Lupine Assassin from the FA servers, rather than taking the matter to litigation.[5] Posting any drawing depicting Lupine Assassin is now a bannable offense. Lupine Assassin also threatened to sue Sciggles in order to get rid of a white werewolf character she created that looks like his fursona in inverted colors.

On June 6, 2010 Lupine Assassin announced that he was registered for and would be attending Anthrocon 2010.[6] A petition was started by Bryan Daniels in response to this with the promise that if the petition reached 100 signatures, he'd personally file a report against Lupine Assassin for abuse of government aid. The petition surpassed 100 signatures within 24 hours, ultimately receiving over 400 signatures.[7] Daniels filed an online submission to the New York City Bureau of Fraud Investigations the next day.[citation needed]