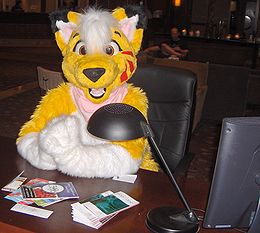 Lucky Coyote (born May 27,[1] 1987) is an artist, fursuiter, fursuit builder and YouTuber originally from Dallas, Texas, USA. She lives in Phoenix, Arizona with her partner Skuff Coyote, with whom she co-founded Don't Hug Cacti, a custom fursuit company, in Chicago, Illinois on April 23, 2007.

On October 4th, Don't Hug Cacti issued an apology[5] stating that "DHC does not condone any immoral or illegal activity." and "She had left social media several weeks ago and has been receiving treatment for social media addiction and other personal issues." They further commented "Blondefoxy is not the owner of DHC" even though the state of Arizona would recognize her as an owner under local 'community property' law [6]. By November 11th, 2020 DHC had deleted their apology due to lack of evidence being targeted at Lucky Coyote.