Evil Ambassador of All Things Foxy 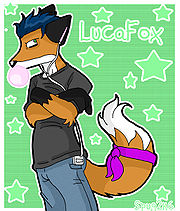 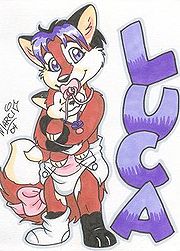 Luca is working as a prep cook at a local hospital, she is an Eagle Scout, and holds a Bachelors of Science degree in Culinary Management. And in late 2018, realized after nearly a decade of considering herself as a girl in general, that she's transgender, and started Hormone replacement therapy (HRT) in April 2019.

Luca started out her involvement within the fandom by joining Furcadia in 2002 as an otter. Over the years her fursonas' species has changed as follows (in chronological order) otter, rabbit, fox, and currently is a three-tailed kitsune.

She is most known for her appearance in the flash animations High Tail Hall and The Penthouse. As well as being a longtime member of the babyfur community, Luca was once active in both Second Life and Tapestries, but has since lost interest in both.

Luca's first furry convention was Anthrocon 2006, and she has attended Anthrocon ever since. For several years she was a volunteer, and as of 2017, she was asked to be part of the Programming Staff for the game rooms.

Luca can still be found on a number of other websites, including FurAffinity and Kingdom of Loathing.

Luca's kitsune magic includes an ability to change the size, age, gender, and species, other physical attributes (hair, fur, etc.) and chemical make-up of her form (i.e., becoming latex). There are some traits she readily identifies with her character, however.

The reference image to the right provides a good example of how Luca generally appears, in particular, the fur patterns, colors, and various accessories.