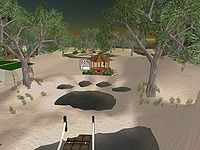 Lost Furest is an area in Second Life. Home to the Lost Furest Creatures furry avatars, founded by Cheetah Kitty. This island sim is "Mature" rated.

As of 2008, LFC has gained more avatar creators. In 2007, the Lost Furest redesigned their look to set focus on the avatars they sell. The name actually represents the act of being at rest or as we call it "Fur-Rest". When visiting you will find LFC avatars in the center tree, then surrounding it would be the 4 seasons of spring, summer, fall, and winter.

Collecting donations for Island upkeep fees is a popular activity on islands, furry or otherwise.