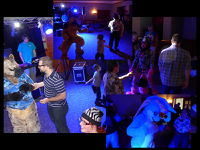 Picture from the first dance of the Longhorn Furs

Longhorn Furs was a student organization founded by EJ Otter at the University of Texas in Austin, Texas, USA.

Its first event was a dance in the Student Union that had about forty people (including five or so fursuiters) in attendance.

The mascots of the organization were Biff, a female griffon that is part Longhorn (UT's mascot is a Longhorn); and a male albino squirrel in rainbow raver gear (in references to UT's albino squirrel population).