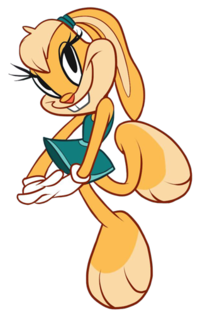 Lola Bunny (pre-production Bunni Bunny, Lola Buni, Lola Rabbit), is an anthropomorphic rabbit cartoon character from Warner Brothers Studios. She is the canon girlfriend of Bugs Bunny. However, in The Looney Tunes Show, the relationship with the two was imbalanced, with Lola being obsessive and clingy, and Bugs being trapped in the relationship. In the end, Lola mistakenly thought Bugs was proposing, but left Bugs at the altar for Pepé Le Pew.

In the 1996 film Space Jam, Lola Bunny was a basketball player for the Toon Squad and was very contradictory to the Looney Tunes Show. In the film, she is very confident and athletic. Bugs Bunny is even the one crushing on her.

Flayrah has a related story:
As 'Space Jam: A New Legacy' draws nigh, non-furry Twitter processes its feelings for cartoon rabbits
Retrieved from "https://en.wikifur.com/w/index.php?title=Lola_Bunny&oldid=536479"
Categories: