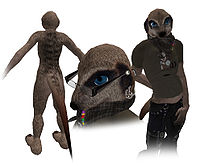 Loki is an online fur, anthro artist, and DJ originally from Northampton, United Kingdom, he moved to Wood Green, London, United Kingdom in 2009. He is a server admin of the Furtopia IRC network, and staff member for the RBW UK furry convention. He is also an op for various channels on the FurNet_(IRC) network and an avid Second_Life user/builder going by the name Citra Latte.

Loki's fursona is a meerkat, occasionally in anthro form. He is an active fursuiter, and regularly attends the LondonFurs meet and the occasional con. He enjoys travelling around the UK to meet new furs and make friends.

As an anthro artist or furry artist Loki uses mostly digital media, but has produced various traditional media images as well. His images usually depict anthro forms, with emphasis on a true-to-life humanoid proportions. He uploads his artwork to Furaffinity, deviantART and VCL.

While not a commissionable fursuit maker, he has spent some time making his own, believing in the personal touch. His fursuit has the typical meerkat eye patches, lighter underbelly and dorsal stripe markings. A few additions to this include his various piercings on his ear and tongue. His appearance and clothing choices make for a more alternative-looking fursona.