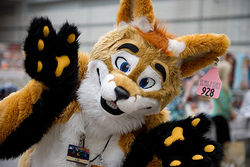 Loki, taken at Anthrocon 2010 after receiving his ear-tag

Loki is a fursuit enthusiast who lives in Quebec City, Quebec, Canada. He was at one time the administrator of the FrancoFur community, and now its co-administrator along with Kimen.

His fursona is a fennec fox, usually in anthropomorphic form, with some variations in colors and fur pattern from the original animal.

Loki's fursuit was built by Shengoh, and was first worn in public in June 2010.