Loja dos Furries (in English Furries' Store) was a Brazilian online retailer and publishing house focused on furry related articles, for instance, books, comics, t-shirts and accessories on Brazil[1]. They were the official reseller for Sofawolf, FurPlanet and Rabbit Valley on Brazil. Their catalog was intended to bring products from abroad and make them available for local purchase. National products are also available when an artist decides to do so. The store, however, do not intermediate deals between customers like Furbuy does.

The combination of the average age of the Brazilian furry fandom and the dismal access to financial credit makes international purchases difficult for furries. Also, high prices are generally an impediment when importing commodities from abroad.

To solve this problem, Fauna Urbana created a local store, offering local purchase options, financing, and dealing with the whole complicate process of importing and dealing with customs. By doing this, the whole country can now benefit from furry-created products, delivered from local stocks, usually in less than three days, in most of the cases.[2]

Koush was elected to be the chairman, while Ekevoo, Tanuki Gokuhi and Reyres Wolf are in charge of the infrastructure and systems.

In 2019, just Tanuki Gokuhi and Aniki Geelong were running the store. On July 1st, 2020, Tanuki closed down operations and the store ceased its activities on that day[3].

The store were constantly making partnerships world wide, currently being the official reseller and distributor of Sofawolf[4] and Rabbit Valley on Brazil.

The store only ships inside the Brazilian lands as a period of approval process before start covering South America entirely. The store do not published a date to start selling abroad yet due the complicated legislation and the heavy taxation in Brazil.

The entire catalog from Sofawolf and Rabbit Valley was available at Loja dos Furries for purchase plus national products, but not all products are physically in their warehouse located in São Paulo, SP, Brazil. For those items, the customers ought to wait an additional delivery time[5], though the price do not change.

Examples of products used to be available for purchase: 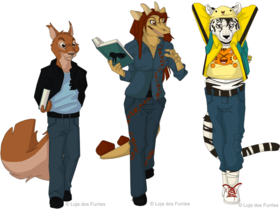 Loja dos Furries had three mascots, each of them representing one kind of personality you can generally find among Brazilian furries.

Loja dos Furries also had acted as a small publishing house for local furry related material, though any national work got eligible to be sponsored yet. For those who desire to be sponsored and get his/her comic or book printed, translated, and distributed internationally, ought to pass through market research first.

On July 1st, 2020, Loja dos Furries made an announcement on Facebook and Twitter advising their customers about the store going out of business. The link on the post takes people back to their official website where Tanuki Gokuhi address the community.

In the statement, he thanks everyone for such an amazing time and explained that the name and domain address furries.com.br was also acquired by a Brazilian furry-ran company Red Panda Toys, who plans to create new initiatives to the local furry community using that address.

In addition, Tanuki highlighted that customer related data such as (real names, addresses, phone numbers, payment information, and e-mail addresses) were not part of the purchase deal and won't be given to the new owners.[6]