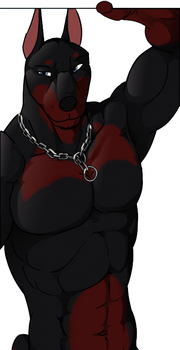 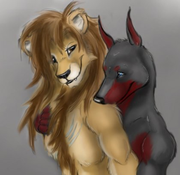 Linkin inside of the Nova fursuit.

Linkin found the furry fandom sometime in 2007, stumbling across a picture by artist Taurin Fox. He continued to investigate this intriguing community through Yiffstar, now SoFurry and other small furry art-related websites using the name AlphaFox. He browsed around, but never interacted with anyone. There were two artists that particularly caught his eye, Klaus Doberman and Luka as well as commissioner Blaine Edan's Doberman fursona. Their Doberman art, combined with childhood video game character Link on January 15, 2008 forged Linkin Doberman.

For the first few months, Linkin submitted art on Yiffstar and slowly started to build his fan base. Once he had saved enough money he purchased a Bamboo Wacom tablet and began doing digital art. He made it a goal to always do better than the last picture he submitted, and his watchers noticed his rapid improvement.

He spends a lot of time drawing art of his Doberman fursona, of the same name. He is easily recognized by his unique fur colors, black and mahogany.

Linkin joined Fur Affinity on May 13, 2008 under the user name Doberman and used that profile for a little over a year. It's uncertain how he came up with the name Monroe, though he believes it may have come from either U.S. President James Monroe or Marilyn Monroe.

On June 9, 2009 Linkin met Jason Amora. The two talked all afternoon long, and they discovered they had a lot more in common then they thought. On June 13, 2009, four days later, they were boyfriends. On June 16, 2009, three days after that, the couple was already making plans to live together, along with the furry writer, Komatose. Trying to earn enough money for the both of them to be able to make it over to Illinois they created the collaborative account Neo Genesis, a name Jason picked out. Finally in August, they moved out of their parents home and in with Komatose. To celebrate, Linkin created a new FurAffinity account Linkin_Monroe.

Then tragedy struck at the end of November and Jason had to go back home to his parents, promising Linkin that they'd be together by March. December went by slowly, and Jason expressed how dead he felt without Linkin, and vice versa. So plans changed and for New Years, Jason flew back to Illinois to help Linkin pack his car and move to Arizona and live at his parents house til they could get out on their own feet. Not too long after, the couple broke-up.

The beginning of the new year meant Further Confusion 2011, where Linkin participated in the fursuit parade in November's fursuit, Nova. Just the few times that he wore the fursuit, he was hooked and has been trying to get his own ever since then.

On January 17, 2015, Linkin made a surprise visit to Further Confusion 2015, where he started dating Argyron. The two would stay together for a little less than a year, going as far as to even move-in together while living near San Antonio, Texas before parting ways. The two remained friends afterwards, with references to each-other sometimes appearing in their separate works.

Linkin returned to Salt Lake City, Utah afterwards where he started working towards his own goals, such as a college education. After a few years he moved to Seattle, Washington where he currently resides.

Linkin Monroe's original fursona is elegant in appearance, reflecting great nobility and temperament. Energetic, watchful, determined, alert, fearless, loyal and obedient. Those were the kind of characteristics that Linkin wanted when he made himself a Doberman fursona. A sleek, powerful and compactly built, proud and loyal canine with sharp intelligence, it was the perfect match for him.

Linkin's fur colors have changed through a short period of time, first starting as the normal Doberman black and brown. In wanting his own uniqueness, Linkin lightened the black to a grey and switched the brown to a more red/brown color (mahogany). When he created his second account on Fur Affinity he switched back to a darker grey, then in April 2010 went back to black. Five months later, he darkened the mahogany color due to multiple counts of being told he had black and red fur.

Right next to trying to remind everyone that it's "mahogany, not red!", Linkin stresses the importance of remembering the choke chain collar. More often than not, Linkin's own watchers remind him that he forgot the chain in his own art.