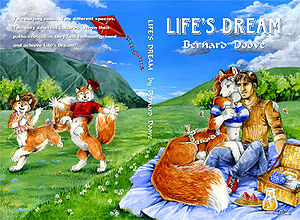 Life's Dream is an award-winning novel by Bernard Doove. It was published by CreateSpace on December 18, 2007 with ISBN 978-1434822604. The book is 248 pages long, and contains two dozen interior illustrations by several different artists, with the majority by Kacey Miyagami.

Life's Dream won the Ursa Major Award for the Best Anthropomorphic Novel of 2007.

In Life's Dream, Bernard Doove tells the story of a male human named Karl, and a female foxtaur named Pandora, who meet by accident at a time when their lives are at a turning point. Despite great physical and cultural differences, they find that they have enough in common to begin a romantic relationship that lasts for decades. During this time, living and working in the foxtaur village, Karl has to deal with travails both environmental and social. In doing so, he and Pandora touch the lives of the entire foxtaur clan and beyond.

Set in Bernard Doove's popular Chakona Space universe, the story in Life's Dream was originally written as part of the series Tales of the Foxtaur Clans, which is a spin-off of the author's flagship series Forest Tales, both of which are serialized online on the author's website. Life's Dream compiles chapters 6 – 14 of Tales of the Foxtaur Clans into a stand-alone story, a practice the author has used before with his other books Transformations and More Terrible Than Chains. The full text of Life's Dream complete with illustration remains available from the author's website, along with other related stories both published and yet to be published.