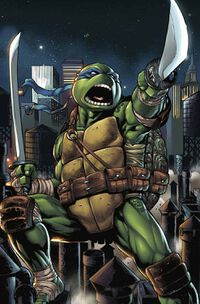 Leonardo (often shortened to simply Leo) is one of the four Teenage Mutant Ninja Turtles (TMNT). His bandana is blue (originally red) and he is named after the famous Renaissance artist and inventor, Leonardo da Vinci. Having mastered Kenjutsu, his weapon of choice is the katana.

Of the four Ninja Turtles, Leonardo is the closest to their sensei/"father", Splinter. He is also the most responsible of the four Turtles and often acts as the leader of the group.

In the original TMNT comics by Kevin Eastman and Peter Laird, Leonardo often acted as the leader of the Turtles, much to the annoyance of his brother, Raphael; he was also somewhat protective of his family. In the end it was Leonardo who managed to finally kill the Shredder.

Recently, Leonardo has managed to make a truce between the Turtles and the Foot Clan and has come to somewhat more friendly terms with Raphael.

Like in the comics, Leonardo was the leader of the Turtles and the most responsible. He was portrayed as an extreme do-gooder who was opposed to extreme violence and who always tried to do the right thing.

In the upcoming movie, TMNT it has so far been revealed that Leo has been travelling the world, honing his skills. He has apparently returned to New York to aid his brothers in battling Max Winters and the resurrected Foot Clan.

Leonardo's personality in the TMNT published by Image Comics was similar to his other portrayals, except he was slightly more easygoing. In the Image comics Leonardo ends up having one of his hands bitten off during a battle against King Komodo. This lost hand is later replaced by a prosthetic one which has a retractable blade in it.

This version of Leonardo is seemingly more based on the Mirage Comics character, though slightly more self-doubting of his leadership skills.

Later in the series Leonardo gains a somewhat more darker personality; this change seemingly brought on by his and his familie's near-death on the Shredder's starship. After this incident Leo had become more obsessive over his training and also more violent, as seen in his savage beating of the Slayer/Rat King.

Later, after guidance from the ancient one, Leo manages to find inner peace and let go of his anger and self-doubt.