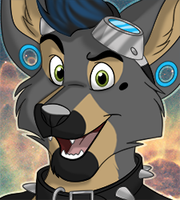 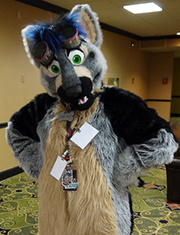 Lenny Mutt in his fursona fursuit 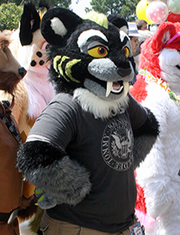 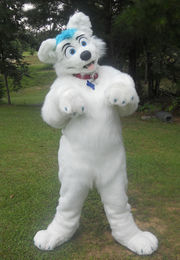 Lenny Mutt (born May 5th, 1984) is a transgender (FTM) furry artist who lives in Northport, Alabama, United States, with his mate, Greypaws. His fursona is a dog, a mix of German Shepherd and Siberian Husky, with distinctive markings derived from both breeds. He is always seen wearing goggles and a black spiked collar.

Lenny believes he has always been a furry[1], from his earliest years when playing as a small child and pretending to be an animal. After renewed interest in The Lion King in mid-2005, Lenny found and joined the Marika's Return online RPG. Around the same time, he began drawing Lion King fanart and, after discovering the furry fandom, began to develop his skills and draw other characters.

In late 2006, he opened his artwork studio Pawzer Studios and now accepts commissions for various things including con badges, character references, and digital pieces. He dabbles in both digital and traditional media and his artwork has also been featured in several conbooks.