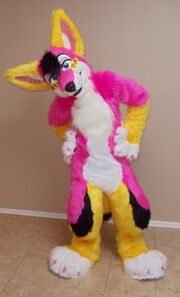 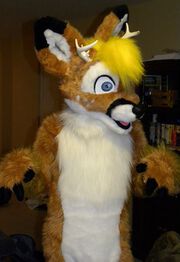 McCormick in a deer fursuit 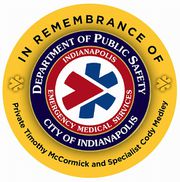 McCormick attended Regis High School and St. Lawrence University in New York.[4] He later transferred to Indiana University and graduated in fall 2012, with a major in political science after four semesters on the Dean's List. He joined the Indianapolis EMS in June 2010.[4]

On February 16, 2013, while on duty at approximately 3:37 a.m., the ambulance McCormick was traveling in was hit by a black Honda car at the intersection of N Senate Ave and W St. Clair St, in downtown Indianapolis.[2][5][6] McCormick suffered serious injuries and later died at Wishard Hospital.[2] A second crew member in the ambulance, Cody Medley, was admitted to Wishard Hospital at the same time in critical condition.[6] Medley died in the hospital the next day.[7]

Police investigating the collision said the ambulance had the right of way because it was approaching a flashing yellow traffic signal, while the traffic signal for the car was flashing red.[8] An initial police report indicated that an officer on the scene described smelling alcohol on the breath of the car's 21-year-old female driver.[6] The Marion County FACT (Fatal Alcohol Crash Team) was on the scene investigating alcohol as a potential factor in the collision, and the car's driver was released following a routine blood-alcohol test.[8][6]

On February 28, 2013, the Marion County Prosecutor's Office stated that it found no criminal evidence in the February 16 ambulance crash that killed McCormick and Medley, and the driver who caused the crash would not be charged.[9] Although the female driver of the second car acknowledged she had consumed alcoholic beverages before the crash, her blood alcohol level was found to be at .038%, which was below Indiana’s legal limit, .08%. Toxicology tests found no evidence of other substances in her blood.[10]

An analysis of the crash scene determined that the car driver was driving at 35 to 40 mph in a 30 mph zone when she ran the flashing red light. The ambulance was traveling 45 to 50 mph, and the medics were not on an emergency run.[10]

A commemorative badge was commissioned by the City of Indianapolis' Department of Public Safety for both medics, and the intersection between St. Clair & Senate Streets where the two were fatally injured was renamed "McCormick and Medley EMS Memorial Way" after a fundraising campaign for an accompanying road sign.[11] The sign was unveiled by the city on July 23, 2013, which was six months after the accident;[12] it was the first time that the city renamed a section of road for EMT workers.

An eulogy video, Timothy C. McCormick - A Retrospective, featuring laudatory interviews with Tim's friends, was created by Curt Pehrson on May 8, 2013.

McCormick attended several furry conventions.[13] He was honored posthumously by fellow EMTs leading the fursuit parade at FWA 2013 with his portrait.

Lemonade was a member of AuroraFurries,[citation needed] which is the founding group behind U18chan.

McCormick's fursonas were a white-tailed deer and a pink, yellow, black, and white coyote.

Lemonade Coyote's deer fursuit was made by Syber with hooves by Whiskey Foxtrot.[15]

Flayrah has related stories:
Fursuiter Lemonade Coyote dies in crash while on EMT duty
No criminal charges over ambulance crash; driver not legally imparied, both vehicles were speeding
Retrieved from "https://en.wikifur.com/w/index.php?title=Lemonade_Coyote&oldid=548176"
Categories: