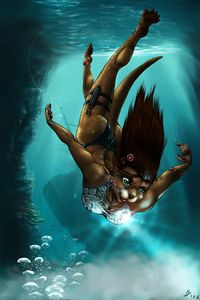 Leilani Perriere (real name Paula), is a furry writer from Ohio.[1] Her character is a Tahitian sea otter.

Paula has been around the Furry fandom for almost 20 years. She started out on FurryMUCK as a delightful black cat named Echo, and then joined Tapestries shortly thereafter as LeiLani, securing her mark as an established fiction writer. She has written nearly 100 stories in that time, as well as a published novel and two upcoming sequels. Before she got involved in the fandom, she was a librarian, a legal and health administrator, a mentor, a schoolteacher, an archaeologist, and a literary agent.

She co-owns a well-established freelance writing and research company in Ohio, in the United States, specializing in business proposals, grant proposals, technical writing and ghostwriting, as well as screenwriting and editing. She also enjoys promotions and advertising, and loves to showcase other artists and writers occasionally. Paula has several hobbies, from books, music and movies, to word games, gardening and swimming.

Some of her claims to "fame" include dinner with actor John Goodman, meeting Roy Rogers and Dale Evans, and getting to pet their horse "Trigger", rushing The Police's Stewart Copeland to the airport, digging up an old plague pit in York, London, and appearing as a zombie in the cult 1978 film by George Romero, "Dawn of the Dead".

Leilani Perriere is a South Pacific sea otter, was born Leilani Malia, on the island of Tahiti in the South Seas on June 6, 1905. Leilani spent most of her carefree days in the sea, diving into treacherous depths for shells and rare pearls, staying underwater for several minutes at a time. The pearls especially became valuable items to trade with visitors and merchants. It was through these associations that she learned to express herself quite well with proper English, and the Western culture soon fascinated her.

She lives now on peaceful Spontoon Island in the South Seas, as a celebrated diver-for-hire, caught up in a variety of mysteries and romances, never finding real love again, but eager to fulfill her sexual desires and fantasies, all the while trying to survive amusing and deadly encounters with a host of villains and antagonists that threaten her.