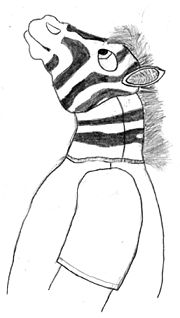 The zebra in the flesh.

Legonnare is a 24 year old zebra who can be seen roaming around FurNet IRC. He can be found in #midwestfurs #hyenas #ozfurs and other rooms as well.

The person behind the zebra is very similar to the equine's size, nature and characteristics. He was born on December 10th, 1984 in Canberra, Australia where he received Dual Citizenship from his parents who were born in the United States. This means the zebra can not run for President or Vice President of the United States of America, not that he would. He was raised from age two in Minnesota, where he currently lives to this day. During his school-aged years, he was introduced into the Cub Scouts and Boy Scouts where he earned the rank of Eagle Scout in 2001. He looks back at it as time well spent, shaping him into the person he is today.

He currently lives with his parents in a suburb of the Twin Cities and has recently been attending local furmeets when the time permits. There various games are played like "The Great Dalmuti" "Apples to Apples" and "Three Dragon Ante." He does bad with these games, but is learning the rules as quickly as he can. You may also see him with a sketchbook and a few scribbles inside of it.

He can be seen in RL at local furmeets and some conventions. He might be slow to open up to strangers, but once he does he is a very friendly and affectionate equine. He is known to be a caretaker for babyfurs online, not minding a cuddle or the occasional diaper change.

He can commonly be seen in a black backpack with a brown bag that looks like a horse clipped to it, a Nalgene bottle full of water and with his zebra tail. On the tail is a safety orange piece of felt in remembrance of a fur who has passed away.

On February 19, 2009 the zebra was hit with a tragic loss. Patrick Reed (AKA Furp) was killed on his way home from work in Twentynine Palms, CA. He was hit at high speed on his motorcycle and pronounced dead at the scene. To this day, the zebra has yet to recover fully from the loss, he and Furp being very close to one another, practically mates. The zebra lives on, doing his best to keep Furp's reputation and selfless caring alive though his hooves.