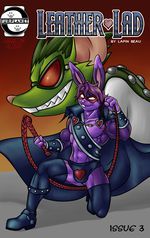 Leather Lad is a series of furry adult graphic novels, depicting the adventures of the "City's newest vigilante superhero".

Created by Lapin Beau, the first issue was published by FurPlanet in June 2008, with a second appearing in July 2009, and a third in June 2011.

Leather Lad is the City's newest vigilante superhero, with a passion for leather! With him around, The criminal underworld has to watch their asses, and we mean that literally. But he's not the only costumed deviant in town...

"In our second issue, Leather Lad and Mistress Belle team up to put a stop to the diabolical plans of the dastardly Doctor Libido!! Can the dirty duo foil his plans and protect the squeamish citizens once again?"

"In the long awaited and thrilling third issue, find out if Leather Lad can escape the clutches of Doctor Libido!"