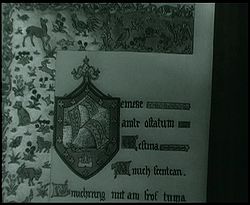 Le Roman de Renard (anglicised as The Tale of the Fox) is the only feature-length animated film by stop-motion pioneer, Władysław Starewicz, based upon the "beast epics" surrounding Renard the Fox.

Filmed with the assistance of his daughter, Irene, during 1929/30, it was originally shown (presumably with intertitles as a silent film) at the Sorbonne, Paris, some time after.[1] However, owing to technical and other difficulties, full public release with soundtrack was delayed until 1937, in German - some months prior to Snow White and the Seven Dwarves - and 1941, in French. Given the political situation in both those countries at the time and the rebellious undertones in the film it is unknown whether or not the released versions were further edited from the original material.

The current version available on DVD is taken from a copy of the French release, restored during the 1990s.[2] 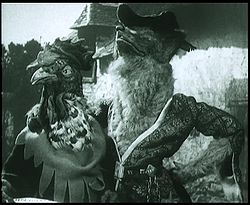 Having experimented with stop-motion animation and produced various short films from 1910 onwards, mostly of an anthropomorphic nature and often bizarre or surreal, alongside live action shorts, the director was forced to flee the Russian Revolution for Paris in 1920.[3][4]

After this time, Starewicz's entire output was focused on developing and refining his model-making and animation techniques, often incorporating real-life elements, in which context Le Roman de Renard is placed. For this work a large variety of models and puppets up to near life-sized were created; the most important characters produced with chamois leather faces and capable of a fine degree of manipulation and expression, even apparently including devices to simulate realistic breathing.

From a technical viewpoint, animation techniques such as motion blurs, crash zooms, whip-pans, multiple-layer superimpositions and integration of real-life backdrops are all used to help bring the scenario to life - most effectively in close shots. The only technique apparently not utilised from previous features is that of color, as was demonstrated in his 1923 short, La Voix du rossignol (Voice of the Nightingale)[5], presumably on quality or cost grounds as models surviving from Le Roman de Renard are fully colored.[6]
Several of the "major" character models from this film were reused in Starewicz's later short films, such as Le Lion Devenu Vieux (The Old Lion) from 1932. 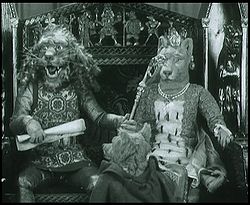 Told as a "film within a film", the simian projectionist and narrator first introduce selected characters from Le Roman de Renard from a three-dimensional animated book before leading into the main sequence of the film.

Renard is introduced to the audience and some of his harmless, and not so harmless, tricks upon others are shown - both for mischievous purposes and in order to obtain comestibles. Chief among his rivals is the wolf, a somewhat less shrewd and gullible individual.
Following these and other "pranks", the lion King, Noble, continues to receive petitions from his various other subjects complaining about Renard's behavior. Various of these are told in flashback but Renard's cousin, the badger, "the best barrister at the beastly bar" retells events to the fox's advantage and his accusers detriment. Noble, however, is clearly unsure and thus to put an end to the bickering decrees that his subjects are henceforth forbidden from eating each other. 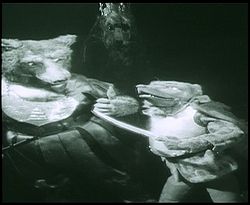 Renard, however, is unwilling to comply and, after a further outrage, the King sends first the bear then the cat to call the fox to court to answer for his crimes. Unsuccessful, the wily badger is "encouraged" to retrieve Renard which he does, aided by a somewhat supernatural occurrence. Facing justice, Renard is compelled to contrive a plot whereby other members of the court have been seeking to overthrow the King which, bizarrely given his track record, is believed but does not get the fox off the hook for long. Unable to resist rubbing things in, Renard faces the army of the King in a final showdown; after which the film is "bookended" as it begun.

Whilst mostly linear, there are other threads running through the film such as the ongoing rivalry between Renard and the wolf and the various ways in which the latter is tricked to believe the fox's tall tales and fantasies. Also, the Queen is a coquettish individual who appears to inhabit her own dream world which visibly alters as events transpire, much to the annoyance of her husband, who is at least in part aware of this yet has his paws more than full with other events.