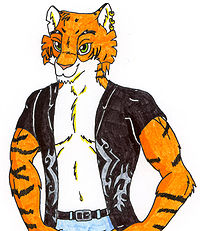 LeTigre (born May 5, 1984, in Zwickau, Germany) is a fursuiter who lives in Leipzig.

LeTigre's fursona is an anthropomorphic tiger. He has a slight figure and always wears three golden earrings in his left ear. The right ear has a little notch. He also wears a golden circlet on his upper left arm and lower right leg. His eyecolor is green.

LeTigre also appears in a storyline where he is the captain of the spaceship Minerva.

LeTigre discovered the furry fandom in 2004. He is co-organiser of Tropicon, the TJiL, and the SFD, where he acted as Organizer, DJ, and Barkeeper.

He can be found on Second Life as LeTigre Graves.

LeTigre's first fursuit, which depicts his fursona, was built in May, 2007, by his mate, Konu Eikuku Hentaru.[1] The first convention he appeared at was Eurofurence 13, where he took part in the Fursuit Game Show and appeared in two skits for the Stage Fever.

His second one is called Lysander. It is a Lynx which charactaristics are based on a character of LeTigres Story. His first appearance was on Eurofurence 14 (LeTigre wore the suit only as a halfsuit during the first day of the con because a little shortage on time lead to the fact that the Suit was finished during the convention). Lysander mainly appeared on the two dances and took part in the Fursuit Game Show, which was won by Lysander (LeTigre) and Chibi-Rangfar (Konu).