Lacunae, the Book of Missing Spaces

Lacunae, the Book of Missing Spaces (usually just Lacunae) is a furry comic by artist Silverblue about a near-future post-disease Australia inhabited by both Changelings (the diseased) and Purebloods (the clean). The strip began on February 1st, 2002. There has not been a new update to the comic since 2006.

From the blurb: "Lacunae is an anthropomorphic gothic-punk comic set in Melbourne, Australia. Years after the terrible Plague ravaged the land, twisted Changelings lurk amongst the populace, spreading infection and death. Mysticism and art meld into strange new forms, philosophy and prophesy equally vital for surviving the madness that the world has been plunged into." 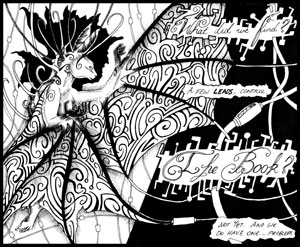 An example of the art style in Lacunae

The comic centers around a group of antagonists (Crimson's Haemophage Pack) and protagonists (the Changeling Control Division of Saint Kilda). A third group, the owners and inhabitants of the Hotel Nevertel, appears to maintain a neutral stomping ground for a mixture of Changelings and Purebloods.

Crimson's pack are a group of blood drinking Changelings, called Haemophages, which are murderous and half mad. While not entirely evil, they often commit atrocious acts, unable to control their appetites. By comparison, the CCD is a highly controlled group of Purebloods and Changelings who work to try and bring peace to both Changeling and Pureblood communities. While there are chemical suppressants which can enable a Changeling to be non-infectious and suppress their darker sides, the drugs have painful and occasionally terminal side effects. The issue of how to humanely handle Changelings is a difficult one in the Lacunae world, and has been solved variously through execution, gulags, drug regimes, or counseling. At the moment, no clear solution is present.

So far, Hawthorn of the CCD has become involved with Silverblue of Crimson's pack, interfering in her attempt to 'rescue' an ex-pack member on suppressants who was in hospital dying of an aggressive cancer. Rather than allow her to 'infect' the dying patient again, Hawthorn shot her with a living bullet. Silverblue has since run into the Commeddia, strange mask wearing creatures who removed the burrowing bullet.

Lately, it appears that all the characters are having peculiar dreams, mostly traumatic. Hawthorn and Silverblue both are of the opinion that they are being forcibly broadcast to, as if something is searching them for information.

Not recommended for a young audience, due to sexual and drug content. 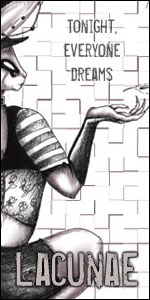 Anaphora is a red panda, and a Mask on the way to becoming a full Changeling. A poet, he is in the process of changing.

Asagwe is a domestic cat, and one of those who runs Hotel Nevertel. He seems to suffer from a fairly serious skin disease which leads to the loss of his ears. He likes playing golf and investigating the luggage of his visitors.

Crimson is the leader of the largest pack of haemophages in Melbourne. Sadistic, intelligent, and highly precise, he is an exceptionally dangerous individual. He is a very tall, very slender jackal.

Hawthorn is a domestic cat, a telempath who is the current head of the Saint Kilda CCD. A fairly calm, reasoning individual.

Sean is a rabbit, a current member of the CCD. He was originally a 'freedom fighter' or 'terrorist' (depending on who you ask) in Ireland.

Shadow is a vixen, running Hotel Nevertel with Asagwe. She seems to wear prosthetic tails.

Silverblue is a haemophage rabbit. She is the beta in Crimson's pack, and the oldest current member. Somewhat disaffected, and easily depressed, she spends much of her time trying to avoid the rest of her pack.

Amaranth is a cipher spotted tail quoll, currently a punk working for the CCD. She has some issues regarding reconciling her Native nature and her Punk subculture.

Carnelian is a male haemophage civet, brother to Cerulean, and a member of Crimson's pack.

Cerulean is a female haemophage civet, sister to Carnelian, and a member of Crimson's pack.

Emerald is a fruitbat, Silverblue's adopted mother. She lives in a primitive colony.

George is a squirrel, a cipher and member of the CCD division. He has received a Valour in the Face of Fire award from the Australian Government.

The Hierophant is the current leader of the Masks in Melbourne, a plantigrade lion.

Isadore is a supposed ex-member of the Wired, a bat who is part of the Hotel Nevertel staff. However, Asagwe and Shadow both appear to use her communication abilities, which should be defunct.

Justin is a wild dog anthro, one of the organisers of DecaDance, a well known local goth club in Melbourne. He tends to host the poetry nights.

Lydia is a cipher dalmatian, the office organiser for the Saint Kilda CCD. She pays everyone's wages, and appears to be a lucid dreamer.

Ming is a cipher birman cat, an ex-refugee from Myanmar and currently works at the CCD.

Rust is a plantigrade haemophage hare, a member of Crimson's pack. The omega in the pack, he tends to suffer a little as the others bully him.