Lackadaisy is a webcomic created by artist Tracy J. Butler, set in a Prohibition-era 1927 St. Louis inhabited by anthropomorphic cats. The plot chronicles the fortunes of the Lackadaisy Speakeasy after its founder is murdered. 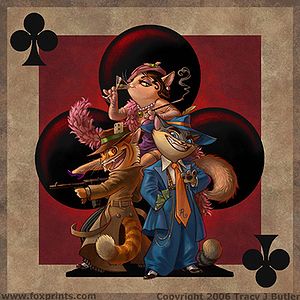 When Prohibition gripped the country in 1920, Atlas May set his eatery, the Little Daisy Café, as the front for a massively successful establishment—the Lackadaisy Speakeasy.[3] Situated within a network of limestone caves at whose mouth the café is situated, access to the speakeasy is only granted to those showing a club-shaped pin.

With fairly easy access to illegal spirits and a steady clientele, business burgeons and the Lackadaisy becomes a premier establishment.

In 1926, however, Atlas was murdered by members of a rival establishment, and management of the Little Daisy and Lackadaisy fell to his widow Mitzi. Patronage at the Lackadaisy gradually fell off, bringing it to the brink of collapse. This is where the comic's story begins. 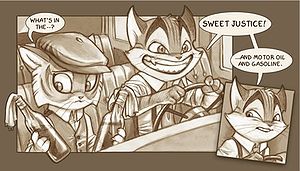 These characters appear at least once in the first chapter, though as of September 2008 they are not listed on the website's list of main characters.

In 2007, Lackadaisy was nominated for, and won four awards in the Web Cartoonists' Choice Awards. It won the award for Outstanding Newcomer, Outstanding Artist, Outstanding Character Rendering and Outstanding Anthropomorphic Comic.

Tracy Butler was the Guest of Honor for Furry Connection North 2009. The art of webcomic is featured prominently on the convention website.

At the The Webcomic List Awards 2010, Lackadaisy was nominated for Best Black and White[4]