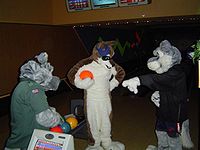 Every first and third Saturday of the month, Lake Area Furry Friends held its monthly LAFF Bowling or LAFFBowl meet. Organized originally by "The Reverend" Ash Maurice Cairo, the bowling meet had been around since early 2004, the first meet only having 4 attendees. Since then, attendance has increased to an average of 85 each month, reaching over 100 on occasion. The event has changed chairmen a few times, being chaired by Butterscotch Vixen, Shale Ari, Timoran, and Reimori. Currently a committee of staff members run LAFFBowl, based on availability.

LAFF dinners were held at Buona Beef until October 2012. Buona beef has closed down and dinners as of December 2012 are now held at The Patio.[1] Once food and drinks are had, the task of shepherding furs towards their vehicles begins to head to the bowling alley. Previously, bowling was held at Fox Bowl in Glen Ellyn, IL.

In 2006, due to several issues between LAFF and Fox Bowl's management, LAFF bowling shifted to a local Brunswick Zone in Glendale Heights, IL. Thanks to cooperation with staff, fursuiters were welcome to suit up and bowl in fursuits. A headless lounge was provided by both alleys free of charge. In the background, artists set up supplies on the tables and begin drawing, often offering free sketches to friends or those interested. After the first round, Fox Bowl often turns off the lights to begin Cosmic Bowling, where black lights illuminate balls, pins and even fursuits.

The event usually lasts 2 or 3 games before the after-parties begin. Popular venues have been Denny's, Steak and Shake and White Castle, home of SliderCon. Since moving to the Brunswick location, bowling went into decline, due to waning interest in the event and the new location. Attendance had been falling rapidly as a result. However, the introduction of an air hockey tournament in January 2007 combined with some basic solutions to the problems at hand and bowling became no longer in danger of fading away and Brunswick became a more permanent home for the bowling.

However, not all members of LAFF were pleased with the move, preferring the environment and amenities that Fox Bowl provided. In June 2007, a second bowling event was started, in hopes to return bowling to Fox Bowl, providing local furries a choice between bowling at Brunswick and Fox Bowl. This event was organized and run by Rayven Wolffe and Blazger and runs the week after the Brunswick Zone event, allowing furries to attend both if they choose.

After Brunswick Zone replaced the party room with a pro shop, LAFFBowl moved again to Tivoli Bowl in Downers Grove, where it ran until the end of 2019

Starting April 11, 2020, this meetup was to be retooled as Chicagoland Furs, moved to Willow Springs, and was supposed to be a furry meetup. This event has been suspended due to COVID.

The bowling meets were revived in May 2022 at Suburbanite Bowl in Westmont on Fridays as a monthly meet.

Westmont, Illinois
Select Friday every month, usually coinciding with the day before LAFF Softball
Suburbanite Bowl: from 10:00 PM - 1:00 AM