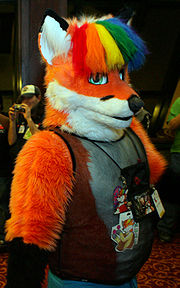 Kurisu-kitsune (born July 29, 1989), also known as Kurisu, or Kuri for short, is a fursuiter living with his mate, Imperial Lion, in Waco, Texas, United States.[1]

Kurisu's fursona is a red fox with bright orange fur and white head-hair with rainbow bangs. His fursuit, portraying his fursona, was built by Noble Wolf.

Kuri also thoroughly enjoys photography and many of his photos can be found on his Photobucket page.